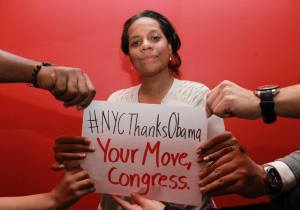 Preparing for Immigration Reform, and Warning of Potential Fraud via New York Times

Only the Beginning: The Economic Potential of Executive Action on Immigration via Immigration Impact

“President Obama has just announced a new executive order on immigration. This is great news, but be careful! Educate yourself and your loved ones before applying and don’t get scammed.” Learn the details here in this clip prepared by Immigration Equality: [EMBED VIDEO: https://www.youtube.com/watch?v=gwoO4tc4TuY]