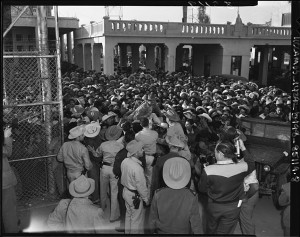 Due to pressure from border states, the Immigration Nationalization Service begins “Operation Wetback,” an unofficial campaign to deport undocumented Mexican immigrants. While officials claim they wish only to expel those who have immigrated to the U.S. illegally, they often focus on Mexicans, even deporting those who immigrated legally and their U.S.-born children. While looking for people to deport, officials adopt the practice of stopping “Mexican-looking” citizens and asking for identification. Mexican-American political activists are deported unfairly, including Luisa Moreno. Over 3.8 million people are deported as a result.

This entry was posted in Uncategorized. Bookmark the permalink.
← Immigration and Nationality Act of 1952
The Refugee Relief Act →