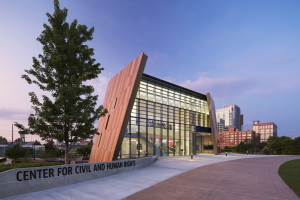 Immigration has become a contentious issue among people and communities across the United States. The increased fear of new arrivals to America has caused a rise in xenophobia as well as a rise in tensions among diverse groups, especially since the immigration debate also has racial undertones. Interestingly, immigration issues and the debate surrounding these issues are no longer confined to traditional destinations for immigrants such as New York, California, Texas and Florida, but they are now affecting every corner of our nation. Considering that states across the country are now influenced and impacted by immigration, causing it to be a national concern, there is a need for local communities to create spaces where individuals, groups and institutions of various backgrounds and beliefs can come together to discuss immigration in meaningful and productive ways.

The National Center for Civil and Human Rights, Inc., one of the newest cultural and educational institutions in Georgia. The purpose of The Center is to create a safe space for visitors to explore the fundamental rights of all human beings so that they leave inspired and empowered to join the ongoing dialogue about human rights in their communities. The Center encourages visitors to gain a deeper understanding of the role they play in helping to protect the rights of all people. Because it teaches and promotes civil rights history and encourages individuals to be change agents, through the National Dialogues on Immigration project, The Center seeks to play a leading role in bringing different people and groups together to discuss and resolve immigration issues in Georgia.

Immigration is an important topic in Georgia. Based on the 2010 Census, the Migration Policy Institute reports that Georgia ranks 2nd in the fastest growing immigrant population in the United States. This growth has not been welcomed by everyone. In fact, the Georgia State Legislature has attempted to pass a myriad of bills to make it very difficult for immigrants to reside Georgia.

Through its NDI program, “Changing Landscapes: Conversations on Immigration,” The National Center for Civil and Human Rights hopes to alter the perceptions of immigrants and change the environment of Georgia, so that all people, despite their nationality and ethnic backgrounds, will be treated with dignity and respect. The Center will convene a group of local, diverse community members who will meet semi-weekly for two months. This cohort will be comprised of individuals from a wide range of professional and personal backgrounds. The group will participate in four programs that highlight specific media, including: lecture, film, music and performance. After each immersive experience participants will engage in thought-provoking dialogue, synthesizing what they have learned during the experience. At the end, the group will develop a joint set of goals and measurable outcomes to further bring lessons learned from these dialogues to the broader community.

At The Center for Civil and Human Rights we seek to promote justice and civil rights in the context of human rights. Because the Universal Declaration of Human Rights (UDHR) is central to the Center’s mission, its articles and overarching themes will also be woven throughout the dialogues. Essentially, “Changing Landscapes” will seek to contextualize issues around immigration in a broader discourse of human rights and social justice, focusing on the intersection of race and identity.

Above all, The Center works to promote dialogue and discussion, believing that people make change through conversations and increased understanding. As an extension of this work, The Center will use its immigration dialogues as a platform to move immigration forward. Ultimately, by engaging individuals and leaders whose work transforms lives and communities, through this program, The Center will make a significant impact in Atlanta and throughout the state of Georgia.