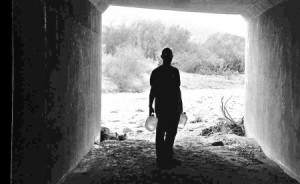 Living in the Southwest, immigration is a constant presence in our lives. La frontera, meaning “the border” in Spanish, is a mere 70 miles from the University of Arizona campus where the Arizona State Museum is located. The museum focuses on the anthropology of people of the greater southwest region. Specifically, we aim to show how diverse people have lived in this area for thousands of years. Through research, exhibits, and programs, we explore questions related to identity, migration, and subsistence. We also examine expressions of culture—artifacts, food, language, and dress—as ways to gain understanding. We invite museum visitors to look to the past and to cultural histories and traditions to try to understand our present and to plan for our shared future in this region.

Two years ago, the museum, in collaboration with the University of Arizona’s Confluencenter for Creative Inquiry, mounted an exhibit of photographs of the border by Alejandra Platt-Torres titled A World Separated By Borders. Alejandra spent four years photographing people and their journey to cross the Arizona – Sonora, Mexico border, a controversial, dangerous stretch of mountain and desert. The photographs provided an opening for museum visitors to make emotional connections to the stories crisscrossing this borderland. As part of the dialogue programs we conducted, we asked participants to imagine those stories.

160 years ago, this border zone was still part of Mexico. In 1854, it became part of the U.S. with the Gadsden Purchase. This piece of land was added to that acquired land in 1848 via the Treaty of Guadalupe Hidalgo. Just weeks before gold was discovered in California, nearly half of Mexico’s northern territory was ceded to the U.S. (including California, New Mexico, and parts of Arizona, Nevada, Utah, Wyoming and Colorado). Mexican nationals whose land was now part of the U.S. were allowed to become naturalized citizens. The international border had shifted twice within a decade. In reference to this, Tigres del Norte, a band sings “The border crossed us” in one of their songs—a great way of summing up the long interwoven history of our region.

During the following decade, American citizens and European immigrants sought to reach the west, stimulating an increased need for a transcontinental railroad. Primarily built by Chinese immigrants, the railroad was completed in 1869. All of this demonstrates that you just can’t talk about the development of the American Southwest without discussing immigration.

In the past, the southwest border was more porous than it is today. Mexican, American and Native American families and friends went back and forth to visit family and friends and participate in inter-cultural events. Even with a more rigid border, we can still feel the cross-pollination of cultures in the music and other traditions of the Southwest. For instance, Waila, dance music of the Tohono O’odham Indians has its roots in Mexican nortena music, Columbian cumbia, Polish polkas, Scottish and German chotes, and other European dances. The name itself is derived from baile, the Spanish word for dance.

With the Chinese Exclusionary Act of 1882, which limited legal entry of Chinese to the U.S., many Chinese immigrants settled in Mexico and tried to cross via Arizona for work or to join family in the U.S. In 1880, 23% of Tucson’s population of 7,007 was Chinese, while approximately 63% was Mexican. In 1910, the Mexican Revolution caused large-scale migration to the U.S. as Mexicans sought a stable, safe place to live and work. Most intended to return once things calmed down at home, though others stayed and made the U.S. their new home.

As the number of non-European immigrants increased, anti-immigrant sentiment also grew. This resulted in stricter immigration requirements and the immigration quotas in 1921 and 1924. It also led to the establishment of U.S. Border Patrol, which was set up to secure the borders between inspection stations. Prior to that, mounted guards worked sporadically along the southern border primarily with the purpose of restricting the flow of illegal Chinese immigration.

The story of our southern border is not the only immigration story, nor is it short or simple. Immigrants to the U.S. have come from around the world and entered through various ports and borders on both coasts and in the south and north. Immigration is complicated, shaped by economic and security factors and racism in immigrants’ home countries and in the U.S., and by human desires and fears.

As we conducted our National Dialogues on Immigration programs related to the photographic exhibit, we realized that youth in Arizona focus only on our southern border and Mexican immigration today. When asked how immigration touched their lives, many said it did not, although with further probing some mentioned that their family had come to the U.S. many generations ago. Others spoke of the contributions of Mexican laborers to our economy or the way in which the border restricted shared resources between the U.S. and Mexico. Some also referenced drug trafficking and security. But there is so much more to immigration. We are currently exploring different ways to expand our visitor’s view and understanding of the history of migration. One product that we are working on now is a short film that will give our visitors a good grounding on U.S. immigration history and policy. Once finished we will use the video as part of our dialogue programs and make it available via YouTube.