Museo Urbano and “A Living History” 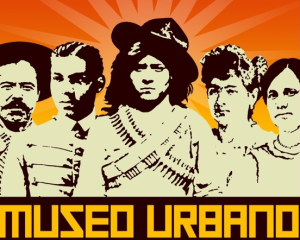 This 2014, each of the participating sites in the National Dialogues on Immigration project will be contributing to our blog post series, “Immigration: Our Stories.” The first post comes from Dr. Yolanda Chávez Leyva of Museo Urbano.

The oldest photograph I have of my mother Esther Chávez is an early 1920s black and white of her as a girl standing in front of the apartment where she grew up in El Segundo Barrio of El Paso, Texas. She and her family immigrated to the United States fleeing the Mexican Revolution of the 1910s. Here, she attended one of the segregated “Mexican schools.” The family went to Sagrado Corazon Catholic Church, built in the 1890s as the first Catholic Church for El Paso’s Spanish-speaking population. In 6th grade, she dropped out of school to care for her younger brothers and sisters after her mother died of pneumonia. When she married at 17, she moved to another South El Paso neighborhood with her husband.

Decades after my parents left their childhood barrios, they would take me on Sunday drives and tell me stories. My mother remembered the excitement of performing in a Christmas play where she sang in her new language. She smiled as she told me about washing dishes for neighbors in order to earn enough money to buy a red dress, which her father immediately tore to pieces. My father’s eyes filled with tears as he recalled running barefoot on unpaved streets or sneaking into the neighborhood Spanish language theater. Growing up I thought of these simply as the family stories of my immigrant parents.

But they were more. Like thousands of other families whose histories are rooted in South El Paso, they represent a living history that connects generations across time and that links the lives of immigrants a century ago to the immigrants of today.

South El Paso hugs the Rio Grande River dividing El Paso from Ciudad Juárez and one nation from another. Standing in front of the Border Farmworkers Center one can see the international bridges that tie both cities together, with long lines of cars and pedestrians. The buildings of downtown Juarez are so close they feel within reach. The neighborhood is filled with small restaurants and stores. The streets of South El Paso, too, are filled with people walking, shopping, and visiting. Spanish is the predominant language. Men continue to wait for day labor on street corners as they have for a hundred years.

Emerging from a 2006 grassroots effort to take history to the streets of El Segundo, a team of historians, artists, cultural workers and activists created Museo Urbano. Some of us had grown up in South El Paso or worked there; others like me had familial roots there. We imagined the streets as our galleries and the historic buildings as our artifacts. As neighborhood residents walked the streets of their community they were surrounded by a rich history that was the patrimony of two nations, but one that was not taught in the schools nor included in the mainstream historical narrative.

To create our museum, we hung historic banners on buildings featuring people such as Teresita Urrea, la Santa de Cabora, an internationally-known traditional healer who had been exiled from Mexico in the 1890s. When she came to El Paso in 1896, thousands came to see her, camping outside her building hoping to meet with her. She saw 250 people a day, bringing her healing touch to people of all nationalities and economic classes.

In 2011, Museo Urbano opened a space in a historic tenement in El Segundo Barrio where Teresita had once lived. For a year we rented an apartment occupied in the 1910s by Henry Flipper, the first African American graduate of West Point. The building had once housed a Chinese laundry, served as the first US Customs House in El Paso and the Mexican Preparatory School, and lodged African American women in a boarding house. We commissioned a mural, “Pachuco Suave,” honoring the work of Don Tosti, whose given name was Edmundo Tostado, and who had been born and raised down the street. Don Tosti’s 1949 “Pachuco Boogie” was the first million-selling Latino song in U.S. history. On opening day, a visitor in her late 80s recalled knowing him when she was a child, telling us the story of Edmundo serenading his grandfather with beautiful violin music as the old man lay on his deathbed.

In the past two years, Museo Urbano has continued our work of documenting South El Paso’s living history. We’ve worked with city museums and women’s advocacy groups, with non-profits and with schools. We’ve heard stories from all ages, from high school students to ninety-year olds. The love of place is palpable. At a time when immigration is at the center of heated debate, Museo Urbano’s living history reminds us that it we are all connected to each other.

Want to learn more about Museo Urbano and its programs? Check out their website or their information on Border Public History, and connect with them via their Facebook!

This entry was posted in Featured News, Immigration: our Stories and tagged immigration, museo urbano, national dialogues on immigration, texas, united states, UTEP, yolanda chavez. Bookmark the permalink.
← Weekly Roundup of Immigration in the News
National Immigration Reform: Are We at A Standstill? →