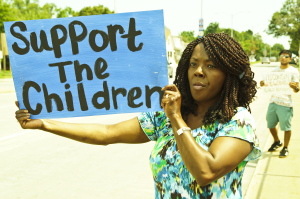 Listen to differing political views on how to handle the unaccompanied children arriving at the US borders in this NPR report, “To Cope With Child Immigrants, Competing Plans Emerge From Congress” here.

With Surge in Child Migrants, New York Forms Task Force on Aiding Them via The New York Times

Hunting Humans: The Americans Taking Immigration Into Their Own Hands via Newsweek