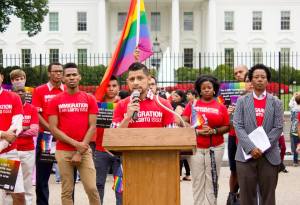 GOP has edge on immigration in midterms via Politico

Ghost town detainees: inside the US immigration detention system via The Guardian

U.S. says 115,000 could lose Obamacare insurance over immigration via Reuters

Will America Live Up to Its Promise? via Sojourners

And finally, the short film, “Neither Here Nor There” by Gabriela Bortolamedi will screen at the Margaret Mead 2014 Film Festival in October: “An undocumented young woman from Mexico navigates the challenges of college while her parents struggle to make ends meet and support her in the pursuit of her dreams. This lyrical, intimate, and heartfelt film tells one highly personal story with significance for millions at a moment of heightened drama for Central American immigrants in the United States.”