What Does It Mean to be a Texan? 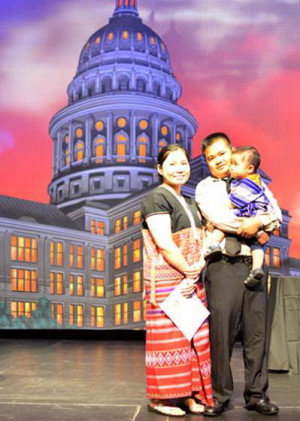 Since 2009, the Bullock Texas State History Museum has been privileged to partner with the Austin Refugee Roundtable to sponsor Austin’s annual commemoration of the United Nations World Refugee Day (June 20th each year). As these pictures can attest, it is a truly fantastic day that includes a naturalization ceremony, family games, art, food, music, dancing, and so much more.

We have always described this event as a “celebration of our newest Texans.” As the museum has become more involved with the National Dialogues on Immigration project, this phrase takes on added meaning for me when thinking about our programs—both the dialogues that we have done and other programs that we host on site. Who do I first think of when picturing someone who has just arrived in Texas? Who might our visitors picture? Does that person look like the people in the photos here? 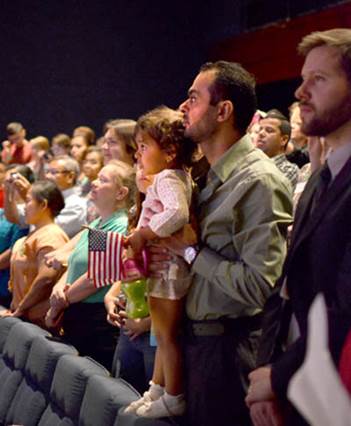 In our dialogue, we discuss the question “what does it mean to be a Texan?” covering issues of both identity and immigration. We talk about perceptions and stereotypes of Texans as well as when an immigrant begins to identify as belonging to the place that he/she migrated to. We also talk about arriving in Texas and whether that was an inherently different process in earlier centuries than it is now.

Up to this point, we have done these dialogues exclusively with museum members—folks who almost by definition identify as Texans (we are the Texas State History Museum, after all). In the fall, we’ll begin opening the conversations to anyone who walks through the museum’s doors. I’m very interested in seeing how this changes the dynamic of the conversations we have. Will the dialogues simply become a chance for people who easily identify as Texan (because their family’s immigration story is from a distant past or because their identity somehow fits the idea of a “real” Texan) to explain themselves to out of town visitors?

I hope that we’ll be able to find a way to celebrate the diversity of the answers to that question of Texas identity, confronting our mythic past and complicating it with stories as colorful as the traditional dresses we see on World Refugee Day.