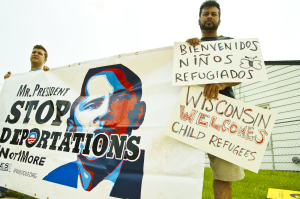 Barack Obama’s immigration moves could be unstoppable via Politico

Immigrant Mothers Released From Holding Centers, but With Ankle Monitors via The New York Times

Immigration Crisis: Photographing the Violence Behind the Honduras Exodus via Time

This video, recently released from Baji, highlights the connection between the War on Drugs and the War on Immigrants for communities of color:

“…[m]ass incarceration and the U.S. deportation machine are deeply intertwined… The rate of detention and criminal deportation is soaring. Black immigrants from Africa, the Caribbean and Latin America are overrepresented in immigration detention and criminal deportatiton proceedings by five times their presence in the undocumented community. And all Latino undocumented immigrants are disproportionately affected by a wide margin. Ultimately all forms of criminalization keeps people divided.”